A murdered father and a missing grandfather...

It is under these circumstances that Phebe finds herself moving to the isolated frontier town of Edgeville. Rumors have it that monsters roam the lands after dark and anyone caught outside is never heard from again. With eerie murderous howling heard every night, Phebe has no choice to become accustomed to this new life if she wants to find her missing grandfather.

Play as this polite city girl as she forages, farms and (possibly)  woos the local villagers  as she navigates this new life of hers. 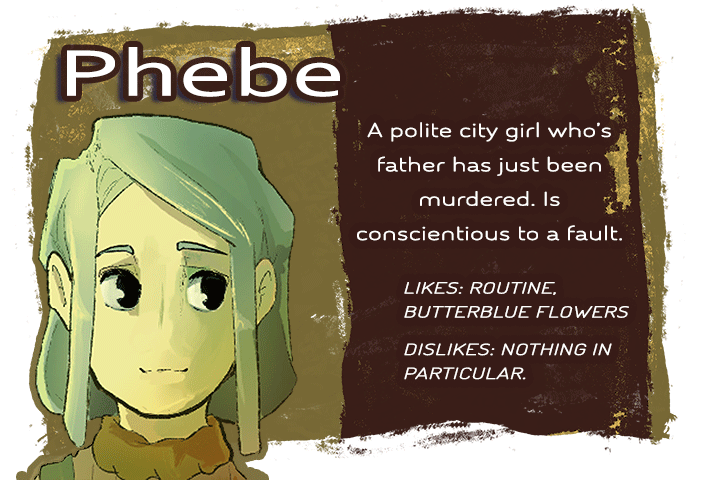 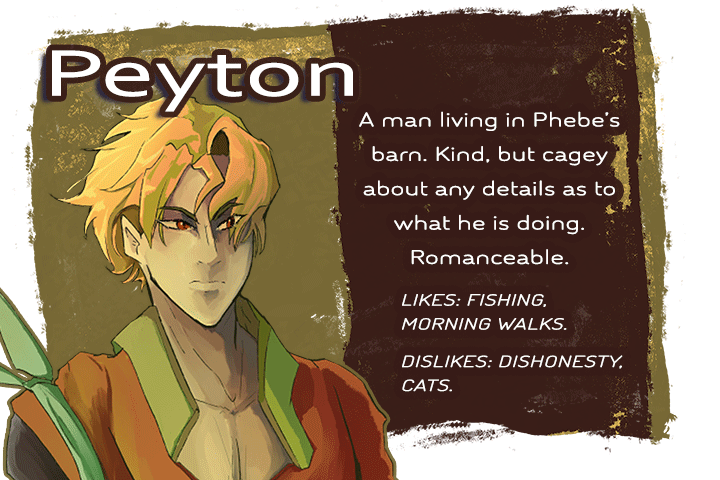 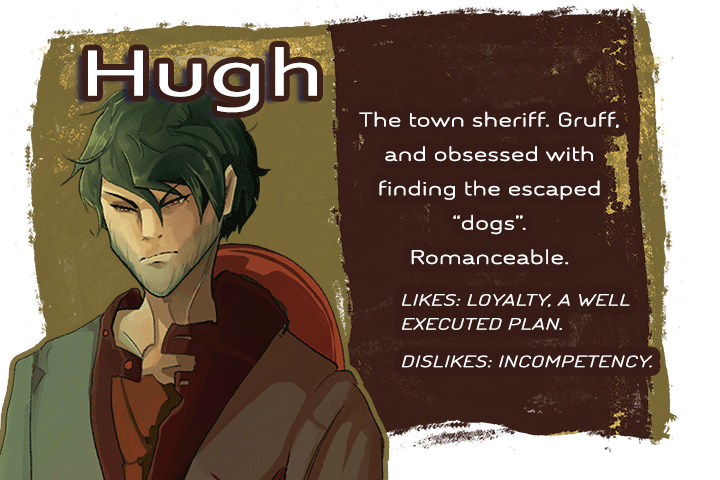 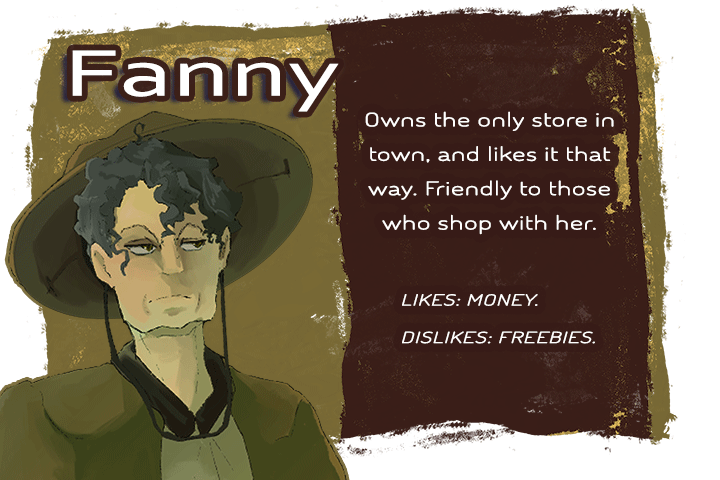 1. Forage, fish, farm and buy items in order to uncover the mystery of Phebe's missing grandfather.

2. Romance(?) one of two eligible bachelors in town. (Careful, some might have their own agenda that doesn't line up with Phebe's.)

3. Day/Night cycles that makes use of Unity's 2D lighting to create an eerie environment to explore.

This is an extremely early build of the game! It only features the introduction scenes as well as the intro scenes for the two love interests. Foraging and farming is fully implemented but not polished. Fishing is planned but not currently in game.

In order for your plants to grow you have to click the plot once per day after you have planted something! In the full version this will turn the soil darker to indicate that you watered it.

And as for the dev cycle for this one: I won't be able to work on this title from April to May (I AM SO TIRED PLEASE LET ME REST *SOBS*) but will be returning to full development on this title in June.

What I am looking for in regards to feedback for this early demo:

Eventually I plan on building a much bigger farming sim game (think Harvest Moon/Stardew Valley) but am currently building up the multiple types of systems I want to implement in these smaller games.

A Heart of Butterblue will be free and has a (current finished but unedited ) script with a word count of 20k. There are two endings, with one being a much longer true ending.

I hoped to have a finished game submitted for nano this year but am proud of what I was able to accomplish, regardless. I hope you enjoy this sneak peek of what I'm working on and will wait for the finished version.

Thank you so much!

Phebe struck me as being pliable in an unnatural sense, like someone made her that way. Very literal and to the point she was, needing a command to do anything. I don't think she had a "good" relationship with her father ahaha almost like he robbed her of her will to do anything or her independence. some of what she said gave me deja vu--i used to stare at towels and carpets and find animals in them, eheh.

The other characters seemed cool. Peyton struck me as little mr revenge hiding in the barn like an assassin :p and Hugh I had a less favorable impression of but I'm willing to give him a chance, as long as he's not abusive.

all in all i liked the characters. i got tastes of deeper mysteries to them.

i don't know. going off of looks Hugh fits my taste more but he's not winning in the personality race. Peyton seems nice...but it's the nice ones you have to be wary of O.O

yasss I would be interested! this game seems really cool and i'd love to help >w< i've also beta tested a few games before this too

Ngl Phebe was like a doll to me, she felt like she had no emotions but instead followed the will of what her father instructed her to do so, it's really intriguing and makes me want to know more of her past and what her and her father were like and if Phebe was a result or a casualty to the experiment Peyton has been referring to. Amazing demo, can't wait to see more~!

Phebe - well I did share my thoughts above but she is quite eerie to me since I display a lot more emotions than her, makes me curious.

Peyton - I'm interested in his past and why he's entangled with Phebe's life, I'm actually really glad he was worried over Phebe cause this girl is like still water. And he's also really cool lmao.

Hugh - Just from those few minutes of interaction I could get a feel of his character, he's surely deeply entrenched in mystery and his constant usage of "dogs" makes me want to peek more but I might get my head chopped off, I sure do hope Hugh gets a soft spot for Phebe because man, if you didn't want people all over your business, stop being so mysterious!

Fanny - this woman is an icon, she's rough and blunt and goes by her own tune but it's entertaining to see that. None of the characters are the typical "good guys", everyone's got a secret of their own and are shaped by the wilderness of this town, Fanny looks to be more on the approachable side which is already saying a lot about the town. Great character A++

None that I noticed, but I did notice that the characters' mouths would move despite there indicidating it was an action and not a dialogue, and the entire segment with meeting Hugh the sprites were kind of glitching in some ways and Hugh's mouth kept moving even though he wasn't saying anything.

Honestly, both. I explained why in the characters but with the most chances I'll survive if I'm curious?? Totally Peyton because the man already has a soft spot over how Phebe just bluntly told the man "Ah yes, btw my dad is dead so yea, lol". Love that girl even if she unsettles me.

I'd be interested to! However I'm not sure how so unless you guys are patient with me or something I won't feel hesitant or burdened over my inexperience over it and would gladly help in any way I can~!

I won't say much re: Phebe and her relationship with her father because I don't want to spoil anything but I will say you are a very astute reader~! :D

Beta Tester -> Oh no worries! No experience needed! I'll put together a devlog closer to the time I have something to test that will explain everything (how to download etc). There should be an update if you're following the page~! :D

Thank you so much for playing and I'm really excited to share the full story with you!

PHEBE IS A BABY AND I MUST PROTECC HER!!!

Im so happy people are liking Phebe, she was a joy to write and Im really excited to see what people think of her whole journey! 😭

It was a good start hihi

Fanny: she's fanny- I mean funny. I like her

While I was playing I notice none.

I mean, Peyton is the true boyfriend material but I'm kinda interested/curious how things would turn out with Hugh.

And yes very much enjoying my time off. I'll be getting back into it eventually and excited for it 👀👀👀

good demo of your visual novel,

Phebe life is hard, I feel sorry for her.

It seems Peyton has an issue with the grand father?

The Sherriff and Fanny, I am not sure what to think but they could have been nicer towards Phebe.

Phebe definitely has a hard life and I'm excited to showcase her full journey in the full game! 😄