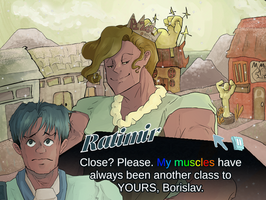 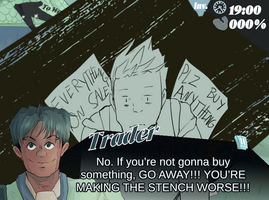 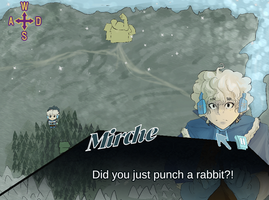 Wow! Here we are folks!

This game was a blast to make and certainly helped me to learn a lot about programming!

There are 7 different endings to find, 10 optional conversations to unlock, a cute little epilogue story to read, and a secret concept art gallery.

It's been a whirlwind of development for this game and it honestly wouldn't have been able to get this far (and look as great as it does!!) without the help and support of friends and family and the wonderful Frederick Game Development Club.

I hope you enjoy flexing and baking your way through Borislav's quirky life! Maybe save the world? Who knows.

I'd also like to fully disclose that there are a few known bugs in this game. I've done my best to eliminate the most game-breaking ones, but there are some that can't really be fixed without essentially remaking the entire game.  These bugs stem from the Save/Load feature (which i implemented extremely late, which is a rookie mistake!!! Haha) as well as the game not resetting correctly upon returning to the title screen.

Most, if not all of the bugs, will only start appearing on your second playthrough. If certain characters start disappearing (Rorric has a habit of just... disappearing randomly on second playthroughs?? It's weird.), if Borislav clones himself (you can see two of him in battle), or if you manage to obtain two identical items (Very rarely the dog will drop a second collar??? But you are only supposed to be able to get one of the random drops per game), these are all bugs. The disappearing character bug can be easily fixed by saving the game, exiting the application and reopening the game. The duplicated Boro and the double item bug could potential impact the types of endings you can get that playthrough.

When in doubt, close the application and reopen.

Get Heart is Muscle

A light RPG/VN about flexing your muscles, helping friends and saving the world.